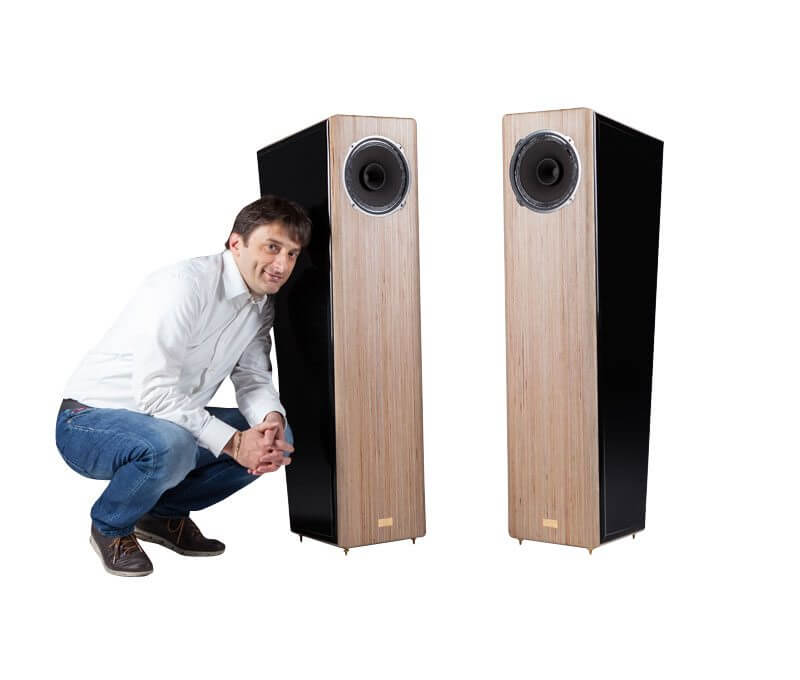 … music and sound have been always around me. It is my who father transferred me the audio bug. When I was ten he bought a stereo system, which in Poland today can be called a classic of those times – a beautiful stereo receiver Radmor 5100, a turntable G-1100 fs Daniel, 30 Watt loudspeakers by Tonsil and a reel-to-reel tape recorder M2403SD Dama Pik. I still have in memory the day we spun a first western vinyl record – The Man Machine by Kraftwerk. It was 1978.

Music is my life companion, I collect records and I listen to them whenever I can. My closest family and friends know it best. My audio gear was changing over years, fortunately not to frequently.

Few years ago I found in the attic our old turntable “Daniel”. After all those years it looked pretty bad. I decided to bring him back to life. It got a new plinth build from exotic wood. I even managed to find a new old stock dust cover. It was a turning point in which my music addiction entered in a new stage – creation. I got back to vinyl records. I bought Lenco L 75 an old Swiss turntable from sixties and it started… During one of the international meetings with Lencoheaven friends in Beauvechain – beautiful small locality near Brussels – I saw a minimalistic little stereo system, build by a friend from Germany which enchanted me by its sound. A small 1,5 W tube amplifier, a digital player and most importantly resonant loudspeakers with Philips full range drivers. I heard something that more common loudspeakers I have heard so far were unable to deliver. My music lover and audiophile energy concentrated from that moment on loudspeakers. I started to experiment with loudspeaker construction. I was reading all I could get about acoustics, sound reproduction, history of transducers and loudspeaker constructions since the beginnings until present times. Also I studied woodworking books. I was buying drivers and constructed enclosures to hear the differences in sound reproduction of each type of construction using the same speakers.

While searching for the right driver I tested French full range drivers Supravox with light paper cone, being manufactured for over fifty years. Thank to its natural sound reproduction Supravox equipped TV and radio broadcasting studios in sixties. When I heard them for the first time I knew already that I found a big piece of sound picture I was trying to achieve.

Still I needed the right enclosure. The construction of the enclosure to perfect fit the driver is a quintessence of construction of the whole loudspeaker. Here again the perseverance in research with a pinch of luck were of help. Among thousands of pages of literature I have read I found a dusty recipe for construction of a loudspeaker system preserving maximum liveliness of a driver and increasing its efficiency. After calculating the volume and the shape of the enclosure the project landed in the woodworking workshop in order to make a prototype. This time the enclosure was made by my brother Andy who for ten years now works in restoring antique furniture. Simultaneously we were working on another type of enclosure of which I had big expectations, so my dusty finding was another experiment with no evident sign of potential satisfaction in the end. As soon as we mounted the drivers in the enclosure and played music it was evident that the experiment was well worth of trying. The sound we were listening to was way ahead in quality of all I have experienced before in my systems and not only. Instantly all other projects were stopped. The difference in sound quality was so important that there were no doubts about what we were going to do.

I can only add in passing that again it proved true that often little pearls are discarded – sometimes forever and sometimes to be rediscovered after years. This is how Adam and Eva were born.

Listening to the achieved sound and encouraged by positive reception of my friends both in Poland and abroad I decided to join forces with my brother and together offer Adam and Eva to the Public.

see reviews of our products
reviews

Thank you! Your submission has been received!
Oops! Something went wrong while submitting the form.